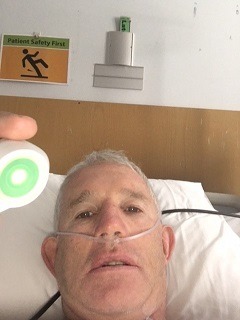 Around mid-November last year (2015), I was doing what I’d been doing every Monday evening for years…wrestling at Langs Mixed Martial Arts Gym.

Halfway through the class, I felt a slight back pain, and as a precaution decided to call it a night.

After trying to tough it out using physio and acupuncture,  two weeks later I finally went to see my GP for some Valium. After two weeks I had more knots in my back than a boy scouts camping trip.

Fast forward a month, and the day before New Year’s Eve, I took the step of getting an MRI done through the emergency department at the Epworth Hospital, Richmond Victoria. Following the MRI, I was advised by the emergency Doctor that he had called a specialist who would see me within the next few hours… Enter Dr David De la Harpe, looking very casual. He told me he was on holidays and had been enjoying a movie.

He took one look at the MRI and advised me that an operation should be performed ASAP (a laminectomy). The only problem Dr De la Harpe had was finding an assistant and an anaesthetist. He said that he needed to make a few calls. Five minutes later, he had organised the team that would operate on my herniated disk between T5 and S1, 9am the next morning.

I am glad to tell you that the operation was a great success, and I feel absolutely free from the relentless sciatic pain that was following me around 24/7/365. I am however, recovering from major back surgery.

Recently I phoned Zurich, my income protection Insurer, who advised me that I did not have to be totally disabled through the waiting period to make a claim, and that the claim waiting period would start from the first visit to my GP (in my case, two weeks after the injury occurred). My policy’s definition states the Insurer will pay full benefit during the time I am totally unable to work, and partial benefit during the time I recover to full health.

So what are the lessons that I can give you from my interesting, but hopefully forgettable New Year’s Eve?